Kendylife: Do you love Tea?

Do You Love Tea?

Why that question? Anyways~ It’s been a while since my last blog post, recently I have been doing the #inktober challenge and it’s one heck of an awesome challenge initiative, you can view it HERE. Today I wanted to share something interesting which you might not know about me.

Maybe here’s something which you can relate to. 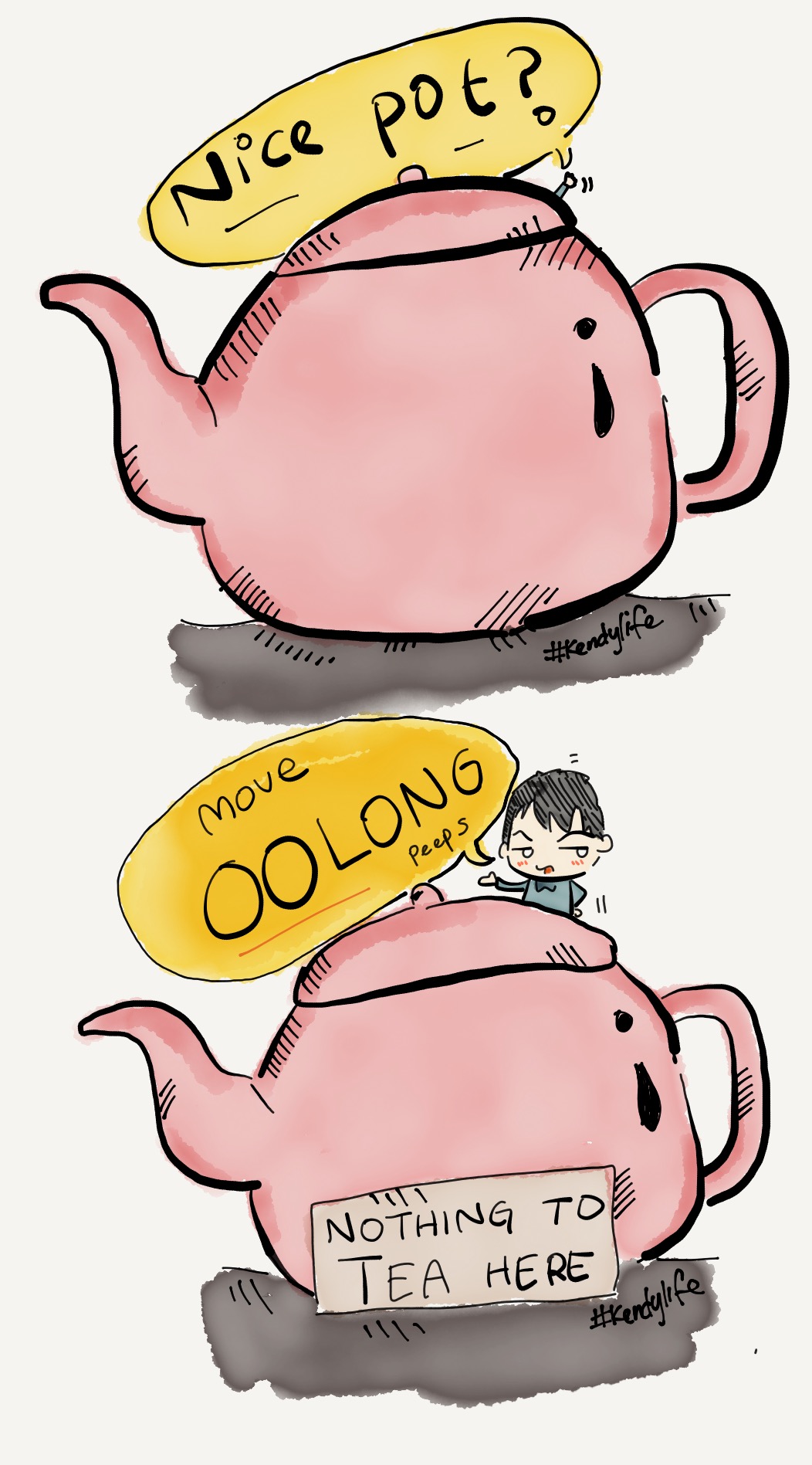 I hope you get what I meant haha~

As an artist, I drink coffee to boost my focus and drawing skills, but every-time I doodle or draw comic I always prefer tea because it somehow keep me at peace. Tell me what do you prefer while doing work.ow about you? Anyways, I am also returning to my usual pun-intended posts which you can find it mostly at my Facebook page. So If you have any requests regarding any commissioned or special request work. You can always message me there and I will reply accordingly!

How Malaysians Shower in comic!

Recently the how people shower has became a trending topic. Without further a due , I created my own version in comic xD 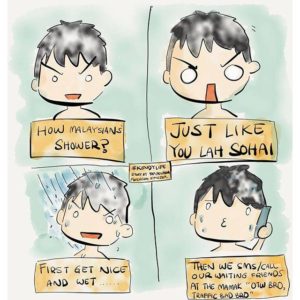 0 comments
Chinese New Year is coming, share the happiness and learn to GIVE BACK to the people you love most. 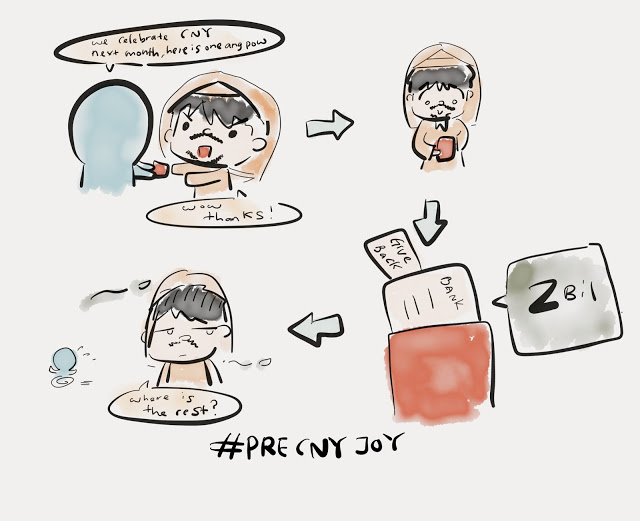 Tips on Giving a Gift

Do remember to remove the price tag.
A gift with a price tag is a hint to the receiver that the gift is expensive, and that the sender is expecting a gift of the equal price.

Don’t give the gift publicly, especially if giving a gift to only one person in a group (to avoid embarrassment, an appearance of favoritism, etc.).

Do not visit a recently bereaved family at Spring Festival, if the Chinese family had the funeral less than a month before Chinese New Year, as this is said to be unlucky (bringing more funerals in the coming year).

Take a pair of gifts with you, as Chinese people believe that good things should be in pairs.

So now you have it! That’s the reason it’s is 2 (Double Hapiness)
Kendy
READ MORE

Inside Social Grooves (Meet the Team)

0 comments
It’s been a week since I am officially in the office.
Met these extraordinary people in the office and I am feeling very young and stylo whenever I’m around this bunch!
So firstly let me introduce the people in #TeamSG (Team Social Grooves) 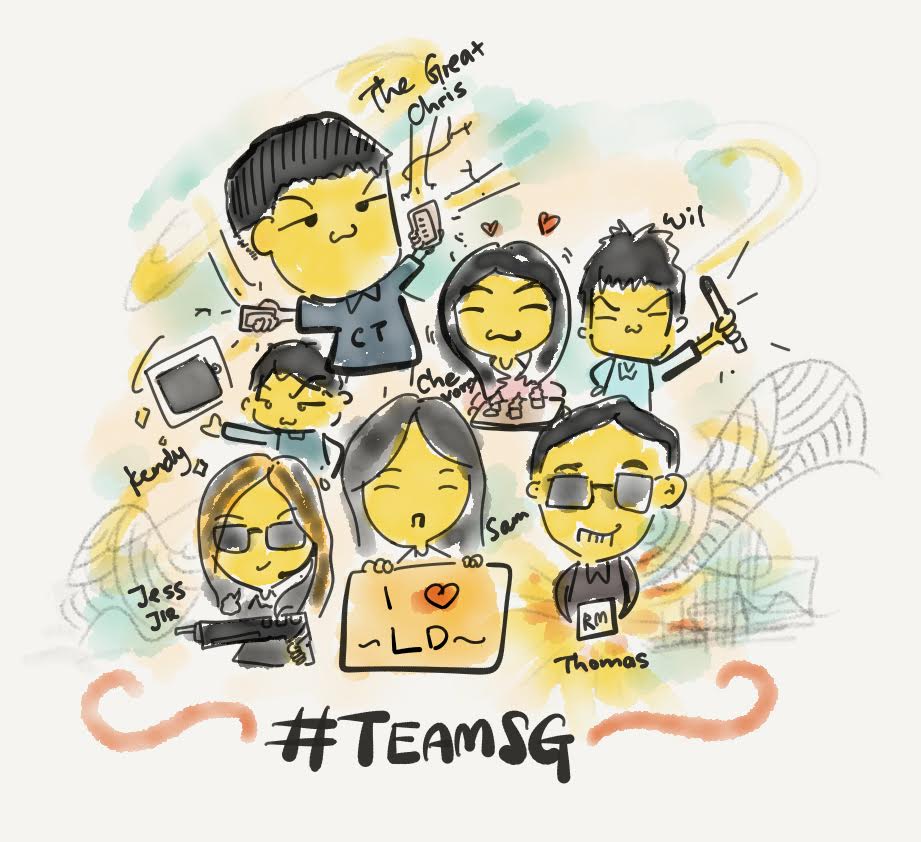 The Great Christopher : Also known as the TECH guy, the founder of Social Grooves and my (Fill in the blanks, its must be positive) partner. Jess wishes that I changed those two phones into “$$” sign but obviously he’s power lies within that two devices which I don’t know what he is up to. And I totally agree with Jess 😛

JessJie : Without her, the company literally can’t function well (Sometimes I think she is Chris’s ulti , something like a bodyguard in terms of silent strategist). She has that awesome powerful girl power which I gladly introduce her as once of the awesome girl for International women’s day (True story). Her greatest ulti is the 2016MGONNAKILLYOUifyoumess withmeGun. No one dares to know what is that gun for, but trust me, don’t even ask!

Sam: The Lin Dan lover. She works very hard (Sometimes a OT-holic, #macamyestapibukan) and YES, her ulti is teleportation. With that sign , she can literally go everywhere! Even nearer to her fav Lin Dan. She can even got her VVIP seats by just teleport there. Well, besides that she can also teleport to any places she wants.

Will: So he is the sorcerer of multimedia. He has the powers to make you leng zai or leng lui and VISE VERSA (you know what I mean). His ulti is “hopefully” the pen of everything, where he can create everything out nothing. If only he can create $$ then we can do more awesome jobs and hire people right? XD

Chevonne: The copywriter, our company must have one (You know lah, my En Ge LISH is the bad at times). She has the belt (so if you mess with her, combines with Sam’s magic LD card and  Jess’s gun) no one can stand a chance! If life is like a RPG game, she recently got a +10 happiness from Macdonalds (The tray of happiness)!

Thomas: The lord of finances. Okay, he manages your finances and makes sure everyone is paid. So he has that ability to hold, stop or block any money flow. So his ulti obviously is , money XD

And there you have it! The social grooves team!
Glad to be working with these bunch!
More stories and more to come!
Go go Team SG!
Kendy
READ MORE 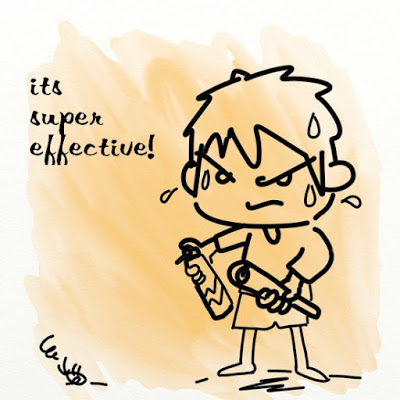 Do you ever encounter something which you least expected?
Well, this just happened to me a few days back!

YES, a cockroach JUST went over my keyboard when I was playing Tree of Savior!
What’s next is HISTORY…I managed to kill the cockroach (don’t ask me how…but I can tell you one word to describe =”epic”)
So then I do a quick research on how the cockroach can ended up on my table….then I noticed that it didn’t came from the toilet, instead it came from the bedroom door! Which means it went from my house-mate room to mine! Ewww!
Anyways, I am a certified roach killer, call me Kendy the roach killer XD 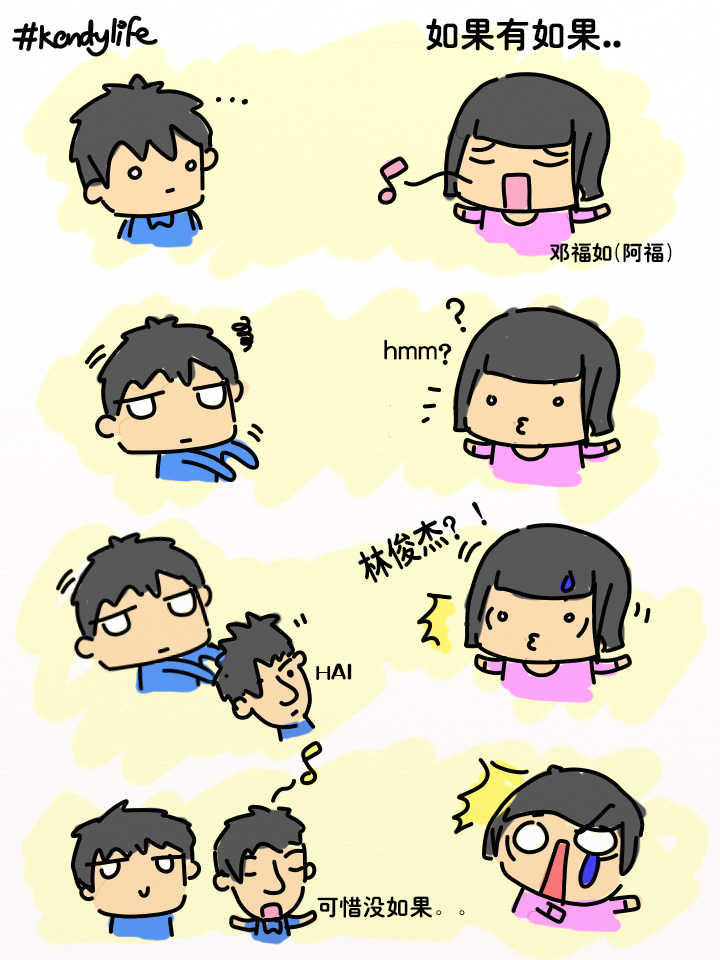 My Best Birthday Wish Ever? 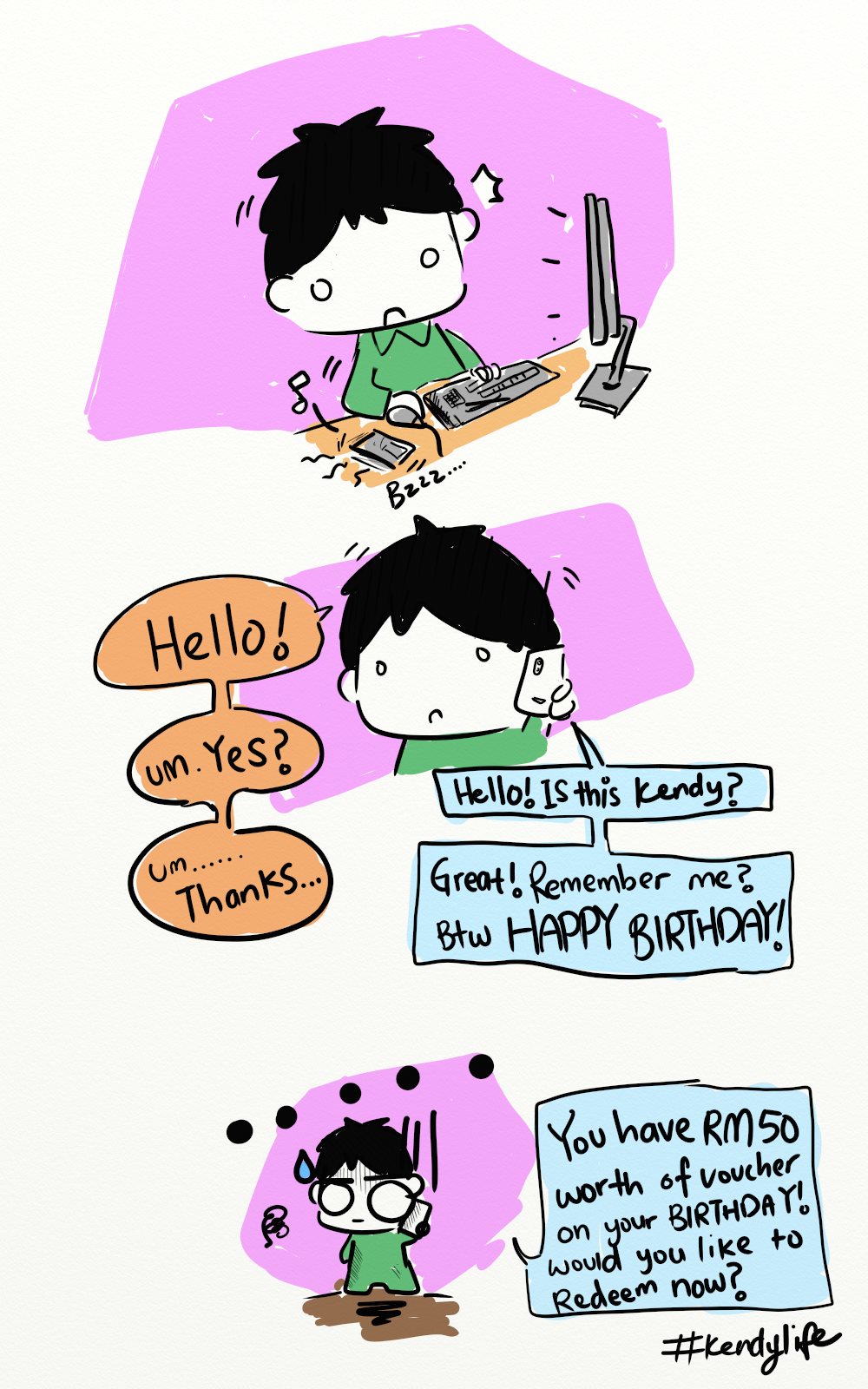 This year my birthday was a quick one.
THE GREATEST GIFT I HAD THIS YEAR IS ..
NOT PARTY
…NOT FANCY GIFTS
AND NOT THE RANDOM WISHES AT FACEBOOK
IT IS SOMEHOW VERY EPIC…
READ ON…

Yes, I have around 28 calls that day, wishing me Happy Birthday, and trying to pitch sales
…..FATALITYYYY!
Anyways…
I wanna thank my
Family who is always been there for wish me and support me
My girlfriend for coming all the way from Singapore just to accompany me
Gifts and postcards from my overseas friends
Some special SMS and whatsapp/Line & Wechat wishes
and all my biddies who remember my birthday!
Cheers!
Ah oh ya, in case you are wondering…my birthday is 22nd June last month. LOL
Kendy
READ MORE

The Minions is here!

I heard that Minions is invading the cinemas today, I guess I’ll need to ride my Indominus rex to the cinemas NOW before all tickets were sold out ! 😛 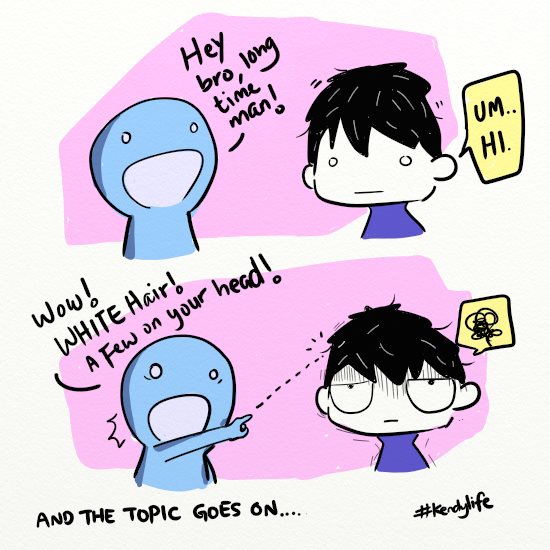 Lately this is what everyone is telling me when they meet me.
Is my hair that attractive?

I guess I need to dye it white…
or….
It’s a sign that
I am getting older…
O.O!!
Kendylife
READ MORE

How to block FB Games in 3 simple steps! 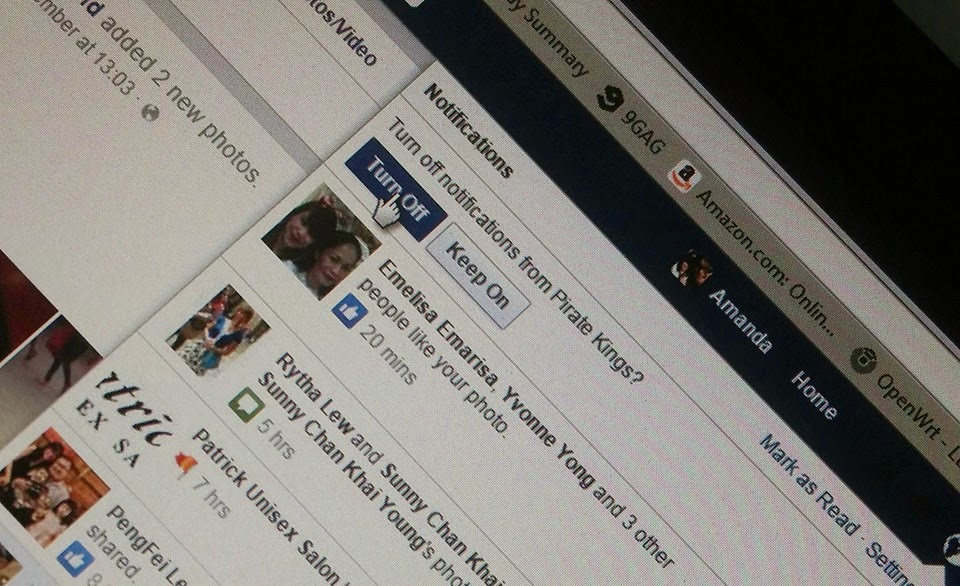 I bet you might be looking on ways to block it (Like the recent pirate king game app)!
So due to most of my fan’s  and friends request, here it is!

There is ONLY one 1 BIG step
The other 2 steps is just to make sure you completely block t! XD
Here it goes!

Still unsure is the game completely block or not?
So where is the 3rd step?
Note: Once you have done 2 of the steps above,
now you can this poster here on your wall haha~
Post by House88kend’s Art. Design. Photography.
Anyways, I hope this post really helps!

For your information, it is yet to be revealed that the mobile version can block these apps but all of these is doable at the desktop or PC versions.

Do PM me if you have other ways to block it and cheers!