So this year I had a chance to visit Comic Fiesta 2015, the biggest convention for Anime, Comics and Games in Malaysia! All thanks to Solomon Freeman a.k.a the Godfather of Japanese culture & my awesome buddy Spinzer (Christopher) for the experience! I managed to doodle something and took a pic (see below):

#kendylife visiting #comicfiesta2015 ! I am giving my stuffs for FREE so PM me so we can meet because there is no charge for Awesomeness ! #comicfiesta #Malaysia #anime #chibi #cute #doodles #random #cf2015
A photo posted by Kendrick Ng (#kendylife) (@kendylife88) on Dec 19, 2015 at 9:32pm PST

Anyways, let’s get to the main topic ~ Comic Fiesta happened last weekend, and it was an awesome blast! So here are 3 things I like about this year’s comic fiesta!

1. Location
Yup, this year’s Comic Fiesta was held at MIECC (Mines International Exhibition & Convention Centre) and to me, it was possibly one of the best locations so far. Although Day 1 was super jam and it is a bit further but still, it is still good. I can say there is a mall nearby (well, just next to it) which is the MINES mall and there are two nearby hotels to choose from.

I normally use public transport to CF, but MIECC wasn’t as accessible as KLCC, but CF has made effort of have Grab Car for RM5 off (Which is good!) and KTM is just a short walk away (Serdang KTM Station) or catch the bus no 414 from the KTM station. Not top forget that there is a water taxi that will fetch you straight to the Mines!

2. We can enjoy food from food vendors! There is a Maid Cafe as well!

For the first time ever (For me), I can now visit the food vendors located upstairs (Mezzanine Floor) and grab a bite before I continue to explore Comic Fiesta! To my understanding, in the previous CFs, it wasn’t common to have actual food inside the hall but this time I can see booths like Thyme Out, Sakae Sushi and many more! And not forgetting to mention La Petite Fox which had it’s own room!

3. Spacious
Besides the eating area at the Mezzanine area, I really can’t deny that the hall is very very VERY spacious! It can even host 2 stages! There is even more at the 2nd floor, we have 2 panel halls and….a photography area! How cool is that?

So I attended one of the panel which is the awesome I.O.E.A panel where I got to know the origin of Otaku Culture and Japanese Pop culture!

In the end…
Well, this year’s CF was an eye opening for me,. After meeting Solomon, he even suggest me to open a booth (Which I missed that chance lol), but hopefully I will have a chance to open a booth and promote #kendylife to achieve world peace (wink)!

Also I met some notable people, pro gamers, cosplayers and talented artists! Maybe next time I should cosplay as pikachu and walk around asking for more photos 😛

Once again I would like to thank the organisers for bringing us another mind blowing, spectacular and awesome convention this year!
How about you?  Do share your experience in the comments below.
Kendy
3.139003101.686855
READ MORE

Recently I read a book which I don’t mind sharing it with everyone! Although the book costing planning is listed in SGD (Singapore Dollar) but I believe many people would benefit from this book as well! What’s more? I am actually implementing his methods as well!

In this book, you can find out almost everything you need to know about inculcating positive money habits and attitudes to help children become future money masters. You will find a step-by-step guide to help you support your children in allocating their money across spending, saving, and sharing (Also known as the three Big ‘S’).

My review on this book: This book has amazing information that you can teach or train your kids. Besides that it is also useful to manage your own spending as well! As for me, hopefully I can learn more from this book 🙂

You can grab a copy of “Raising Financially Savvy Kids” at all major bookstores such as MPH, Popular, Kinokuniya and Times. Besides Singapore, the book is also available in Malaysia! Yeahh! 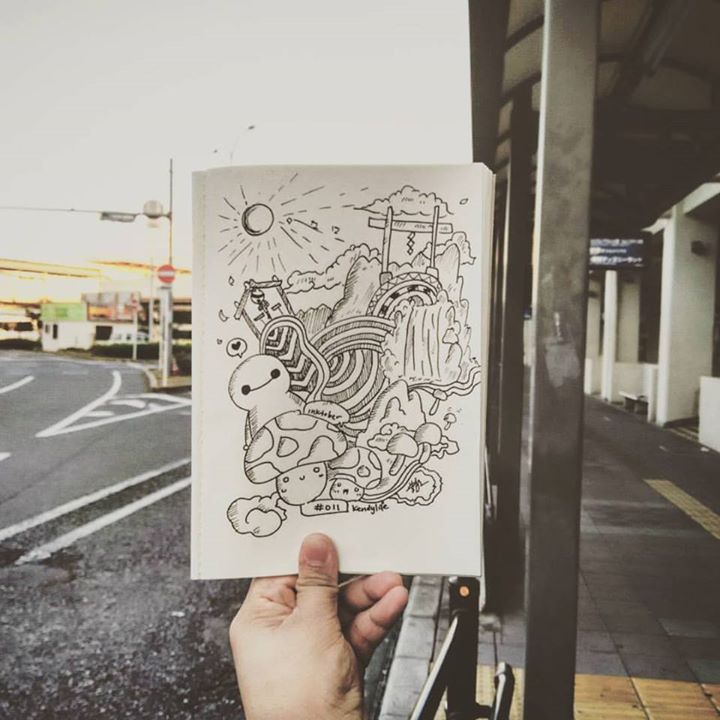 Hello everyone! I guess you must be reading this right now. So this will be a short introduction and announcement!

For those who doesn’t know me, I suggest you to visit this LINK

Here’s an official Announcement from #Kendylife! As most of you may know, this is not exactly my first Blog post but this is my first post at kendylife.com. Some of you might know I own a blog at #Kendylife and you might ask why I need 2 blogs? The reason I didn’t close this blog is because I wanted to retain as it is, as a “webcomic blog”.

1. Will be part of the behind the scenes or work in progress:

2. Will be part of my experiences or travels (Hint: the common hashtag I will use in my travels is #kendylifetravels)

I am finally here !

So there you go! Before I call it a night, I would like to thank all my family, friends, partners, supporters and my fans for the support all these years and towards the making of my official portfolio page!!

Remember the DIY market (Printcious.com) which I share with you before? I actually ordered 2 stuffs for my anniversary gifts  (Click HERE if you haven’t read the previous post)

I don’t have anything to show (Shhh… because my GF hasn’t know about this yet!) . But to know how do you do DIY, you can click on the link which brings you to the previous post, its really convenient!  (Click HERE).

Tracking orders is so convenient, you can always login with your account and check the status of your order! Here’s mine (above image).
Within 1-3 days I received the order already (Depending on the speed type of your order). Here’s a print screen of the order tracking via skynet

So, I opened the package and guess what? The quality of the pillow I order is better than I expected! And the ceramic (11cm X 11cm) is nicely done!

Check this out, it is nicely printed!
I ordered this last month but the reason I am posting this NOW because I am planning to order for my family this Christmas and I must share my experience with all my readers out there!
And guess what? I noticed that they are having a Christmas promotion now! Head over to (Printcious.com) and check it out! (something like 20% of all orders!!)
Hurry up and give your loved ones a special gift made my you 🙂
Kendy
READ MORE

Do you ever encounter something which you least expected?
Well, this just happened to me a few days back!

YES, a cockroach JUST went over my keyboard when I was playing Tree of Savior!
What’s next is HISTORY…I managed to kill the cockroach (don’t ask me how…but I can tell you one word to describe =”epic”)
So then I do a quick research on how the cockroach can ended up on my table….then I noticed that it didn’t came from the toilet, instead it came from the bedroom door! Which means it went from my house-mate room to mine! Ewww!
Anyways, I am a certified roach killer, call me Kendy the roach killer XD